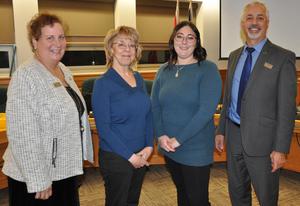 At the November 15th Inaugural Meeting, Algoma District School Board (ADSB) welcomed four new Trustees for the November 2022 to November 2026 term.
Nick Apostle is the new ADSB Trustee representing Ward 5 in Sault Ste Marie.  Nick, a graduate of Western University, is the retired Commissioner of Community Services with the City of Sault Ste. Marie, a position he held for 15 years.  Part of his varied responsibilities included overseeing the Municipal Day Care Division including development of the Best Start Program and its integration into schools.  Nick also oversaw a number of municipal committees including the Municipal Heritage Committee, the Parks and Recreation Advisory Board and the Cultural Advisory Board. During his time with the City of SSM, Nick developed written reports and provided recommendations to City Council on Operational, Programming, Financial, Human Resources and Long-Range Planning issues.

Nick is also a member of the Sault Ste. Marie Hockey Hall of Fame Committee and is a former Director of Parks and Recreation Ontario (PRO).  Nick and his wife Karen, have two sons, Nicholas and Craig, and four grandchildren all of whom live in Sault Ste Marie.
Sara McCleary has been elected to represent Ward 4 in Sault Ste. Marie. Sara is the Manager of Communications for St. Vincent Place and until recently was also Director of Advancement with the Sault Symphony Orchestra.  In both these positions Sara has been hands on with fundraising initiatives, marketing, public relations, donor engagement and event planning.  She is a columnist with Sault This Week, and as a freelance Journalist her work has been published in the National Post and numerous Northern Ontario publications (Sudbury Star, North Bay Nugget and The Sault Star to name a new).
Sara and her husband have two children who are ADSB students and Sara is the Chairperson of the Parent Council at her children’s school.  She has been Chair of the board of human rights organization La'ad Canada for five years and has previously been a Trustee on the SSM Public Library Board. Sara has a Master of Arts in History from Queen’s University and a Certificate in Business Fundamentals from Sault College and is currently completing her PhD in Humanities at York University, focusing on settler colonialism and Indigenous-settler relations in Canada.  In her role as ADSB Trustee, Sara hopes to assist parents who have questions about getting help for their children, but “don’t know where to turn.”
Debbie Shamas has been elected as ADSB’s Trustee representing the North Shore.  Debbie has had a remarkable thirty-seven year career as an Educator and School Administrator.  She began her career teaching ESL at George Brown College in Toronto followed by a teaching position at Spanish Public School with the North Shore Board of Education. Debbie completed her Masters of Education from the University of Ottawa and worked the next twenty-eight years with the Peel District School Board.  During her time with Peel Debbie taught grades one through eight and gained considerable experience within the field of Special Education.  She enjoyed coaching a variety of teams and gained lived experience as a member of a diverse school community which enabled her to develop a sound understanding of diversity, equity and inclusion for making practical and meaningful decisions. Debbie joined the ADSB in 2018 and enjoyed the last four years of her career as the Vice Principal of Rockhaven School for Exceptional Children. At Rockhaven Debbie continued to support and advocate for her students.
Debbie believes that all students and families should have a learning community that is inclusive and welcoming and ensures that all students have an equal opportunity to reach their full potential. Debbie brings passion and positivity to any position she holds and values teamwork, honesty and integrity. She feels honoured to represent the North Shore as Trustee for the Algoma District School Board and appreciates the support of her community. Debbie looks forward to advocating for her community in her new role as Trustee.
Heather Whitley is the newly elected ADSB Trustee representing Central Algoma.  Heather enjoyed a teaching career spanning three decades, a passion which ran deep as both her parents and her husband were teachers.  Heather taught kindergarten for two years in Echo Bay but the majority of her teaching career was spent at St. Joseph Island Central Public School. Her own children attended the Island school and all five of them are proud CASS graduates (as is Heather). This September, five of her grandchildren are enrolled from JK to Grade 2 on St. Joe’s Island.

Heather’s experiences as a JK teacher, an intermediate and secondary English and Physical Education teacher and a Special Education Specialist have given her a broad perspective from which to view, analyze, appreciate and critique changes and trends in education.  Heather hopes to advocate for those who live in rural communities throughout Central Algoma and for those who wish to protect and maintain local schools as hubs of great learning and as places where parents and grandparents can meet and celebrate the achievements of the next generations. Since retirement, Heather has served on the Children's Library Board in Richards Landing. She is an online mentor and has volunteered to sit on the Seniors and Persons with Disabilities Committee in St. Joseph Township. Right up until June, Heather continued to get her "kid fix" by supply teaching with the ADSB.